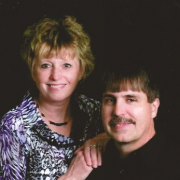 Terry and I were born and raised in Jasper, Indiana and were married in June of 1980. We have been blessed with our son, daughter in-law, and three grandchildren.

In 2009 I enrolled in Indiana School of Ministry in Indianapolis, Indiana. I received my credentials as a certified minister of the Assemblies of God in February of 2011.

I received my license with the Assemblies of God August of 2012. In 2012 I was appointed Associate Pastor at Victory Temple Church of Jasper.

On March 1, 2013 I started Pastoring Living Waters Assembly of God in French Lick.

We love the French Lick area and we reside in West Baden. We are passionate about leading others to Jesus, and are looking forward to all that God has in store!